Working full-time and studying part-time isn't exactly conducive to creating fancy food to show off on blogs, in fact cooking is one of the last things I want to do after a long day at work. I've tried to start exercising more lately in the morning too, adding another hour or two to my day when you factor in the actual act of exercising and then the time spent having to make myself presentable (I hate the wet hair at work look!). So what this post isn't, is pretty. What it is, is simple. It's a fairly quick and certainly easy dinner from Jamie Oliver's 30-Minute Meals book that I found not too taxing for a mid-week dinner. As said, it doesn't look pretty, but it was really tasty and made use of some fresh ingredients I had lying around. When you boil it down (not literally of course), it is a nice comfort meal of baked potatoes, yummy savoury mince and a nice green salad.

Some words from the wise about this recipe. Jamie works on the premise that you have the exact equipment he has and follow the steps exactly the way he does to make the 30 minute mark. He chops alot of the vegies in a food processor. Whilst I have one of these, I'm still reluctant to chop vegies in it (I don't know why) and I don't own a mandolin slicer either, so I diligently chopped everything in this recipe with my somewhat poor knife skills. The recipe is by no means a one pot method either so there was a fair amount of washing up and in this household, there ain't no machine that washes dishes - just Mr B's hard dish washing labour. 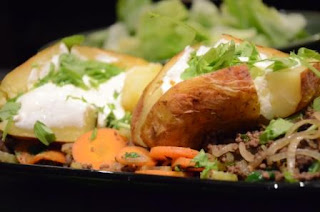 Pre-heat oven to 200 degrees. Place a baking tray in the oven to heat up.

Wash the spuds, stab a few times and put into a a large microwave-safe bowl and cover with clingfilm (I left mine uncovered!). Put in to microwave for around 14 to 16 minutes or until cooked. Remove from microwave. 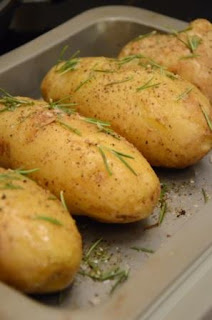 Pick and finely chop the rosemary and add to potatoes with a pinch of salt and pepper and a drizzle of olive oil. Gently toss to coat them in the flavours and transfer spuds to the hot baking tray and bake for around 20-25 minutes (basically until you are ready to serve). Just keep an eye on them at that heat as they may get very brown. I like mine crispy! 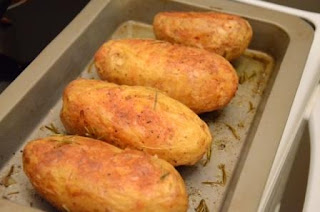 Put mince into large frying pan and break up with wooden spoon. Add pinch of salt and pepper and drizzle with some olive oil. Pick in the thyme leaves and cook until golden, stirring often. 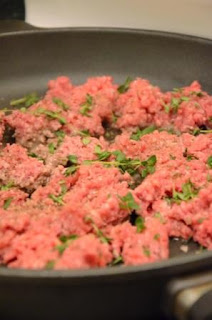 Peel and halve the red onion, chop finely. Wash and trim the carrots and celery, slice these thinly and set all aside. When mince is golden, pick the rosemary leaves into the pan, crush in the garlic and add the Worcestershire sauce. Stir well until nicely glazed and then add the sliced vegies and stir. Reduce heat and stir often. 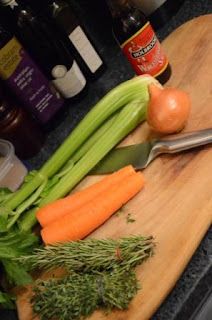 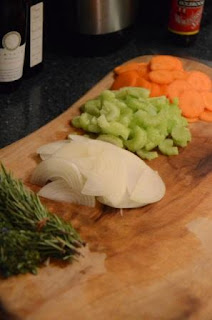 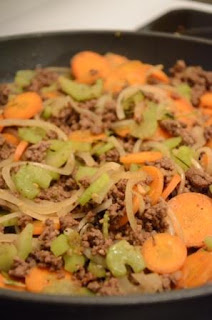 Finely slice the parsley (or rocket) and add most of it to the hash mixture. Trasfer mix to a large serving platter.

Rescue the spuds from the oven. Cut a cross on each one and pinch them open. Serve on top of the hash. Dollop each one with some sour cream and scatter the remaining parsley over the top.

Click the leaves off the lettuce, wash and spin dry. Put into serving bowl. Halve and stone the avocado, then use a spoon to scoop slivers from one half into the serving bowl. Whiz the sour cream in a food processor with the remaining avocado, the juice of 1 lemon, 4 tbsp of olive oil and salt and pepper. If it is too thick, add a splash of water until creamy and runny enough for a dressing. 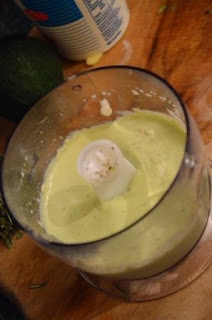 Serve on the side of the salad, or you can toss it through just before serving. 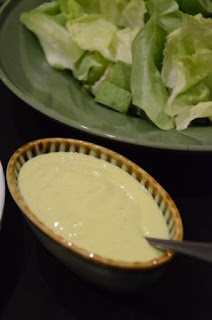 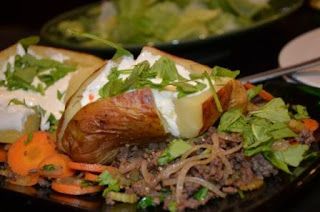