Orecchiette with pumpkin, broccoli and cauliflower

In our house we tend to eat more pasta than we probably should (can you say 'carb-addicts'?) but I guess I could say the same about our Indian obsession and of course my chocolate obsession. When my first little darling (Miss 10) was born I was lulled into a sense of false hope thinking she would LOVE my cooking when I was busy making all those purees that you do for babies, but boy was I wrong about her down the track! I think PLAIN pasta (yes, no sauce, no cheese.....maybe a little butter) was her staple diet for at least 12 months straight (anyone else have/had a 'white' diet child?). Oh and also tomato sauce, but in a separate bowl of course so she could do her own double dipping!


Thankfully she has reached great heights by allowing her meat balls and pasta sauces to actually touch the pasta now. Somthing I thought would never happen and was thinking she'd be 30 years old asking a chef to separate them for her! Now my Miss 5 is suffering the same debilitating disease, but not to the same extreme as her sister. But don't be alarmed B, as it's not contagious because my Master 8 has taste buds that Jamie Oliver would be proud of so there is hope for your little bundle (Master 6 months!).
We normally just have a quick spaghetti bolognaise most pasta nights but I wanted to try something a little different that I had come across in my Neil Perry - Good Food book which was just as easy but with some vegetables instead of traditional meat. Listed in the ingredients are anchovies and seeing my gang can all tick this particular ingredient off their bucket list of "things to try" list, I was determined to see if they were all going to try it for a second time. I can see some of your faces now at the thought of "anchovies" but in both recipes they actually melt into nothing and it's more about the flavour it adds to the dish than eating little hairy fish.
It was definitely about the flavour with this dish and I did what Neil recommended and roasted my pumpkin instead of boiling it as stated in the actual recipe. I would make this again in a heart beat and having 4 out of 5 enjoy this meal is great odds......I'm hoping my Miss 5 will change one day. 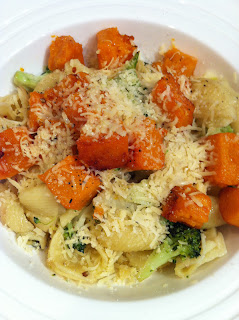 Bring a large saucepan of salted water to the boil and cook the pumpkin until it is just tender. (This is where I roasted my pumpkin for about 30 mins or until browned and tender). Drain and reserve the pumpkin. 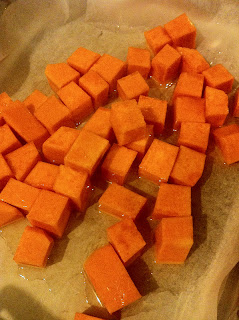 In a large frying pan , heat the oil and add the anchovies, garlic, chilli flakes and a pinch of salt. Fry for about 3 minutes, stirring continuously, until the anchovies start to melt in the oil. 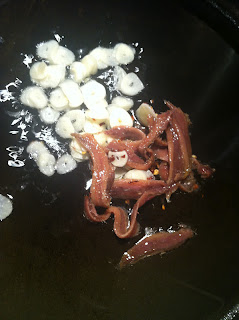 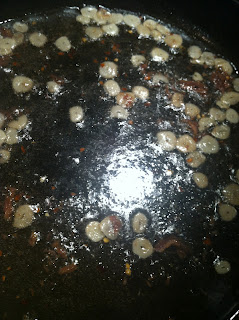 Add the broccoli and cauliflower and a dash more oil, cover, and slowly braise for about 20 minutes, or until the vegetables are well cooked and soft. 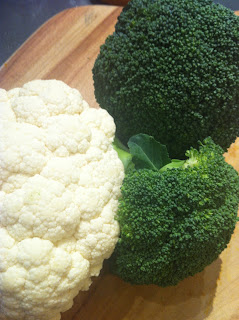 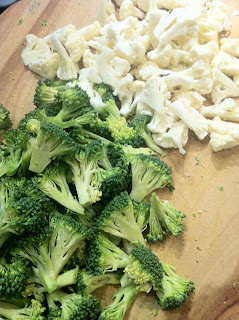 Add the cooked pumpkin and check the seasoning.
Meanwhile, cook the pasta in a saucepan of well salted boiling water, until al dente, then drain. Combine with sauce in the frying pan and continue to cook for a further minute. 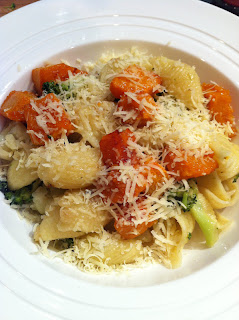