My family know I don't make or even eat soup that often. Two of my three kids won't eat it and mainly, I am not a huge fan of hot liquid dishes. I don't know why (think it's the texture and temperature combined - anyone else not like it?) and I know I'm missing out on so many delicious things like ramen noodle soups and stews. This dislike of liquid meals includes all hot beverages too, although I am coming around to a few things now that I'm more mature (ahem - in attitude of course. Ok, so maybe in years!). My earliest memories of Mum making soup was her famous pea and ham soup and I was one of those painful kids who would yell from my room, "What is that yuck smell?". Since having kids of my own I now know how Mum felt as I get the same little voice saying the exact same thing!!!
Another memory of my dislike for soup was when I was first dating Mr M, and he had arranged for me to meet his family and have dinner at his Mother's place. Of course I was a little nervous at what was going to be served for dinner, as growing up in our house we were expected to at least try something we didn't like on our plate and if we didn't like it we were told to leave it on the side. Mr M on the other hand was brought up to eat everything on his plate as it was rude not to. So you can guess what was served first. Yep, it was soup. Luckily by then Mr M knew of my dislike for hot liquids and politely told his family. Now I never hear the end of it!
My first attempt at pumpkin soup ended badly. It tasted great but the pot I had it in was an electric saucepan and me being a young green apple in the cooking stakes put the lid on the saucepan and left it on while I went and did a few things around the house, totally forgetting about it until Mr M came in yelling and screaming about pumpkin being all over the roof of the kitchen!!! Lets just say that pot was never used for soup again, or for much else.
I have since made a few versions of pumpkin soup. I will admit, they do actually taste great but this particular one I would have to say is a favorite of the family now. I think roasting the pumpkin and the bulbs of garlic really brings out the sweet flavour of both elements. I loved squeezing the bulbs of garlic out of their skins, something satisfying about it and it makes the soup taste YUM! I found this recipe in Better Homes and Gardens Recipe Collection......a great read! 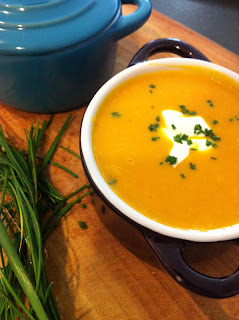 Preheat oven to 160 degrees. Cut pumpkin into chunks . Put in a large bowl, add oil and nutmeg and toss to combine. Season. Transfer to a roasting pan, add garlic and bake for 1 hour or until lightly browned and well softened. 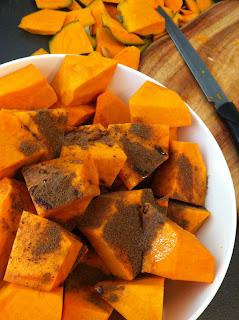 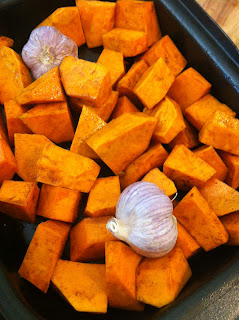 Put onion, celery and butter in a large saucepan over a medium heat. Cook for 5 minutes or until onion is translucent. 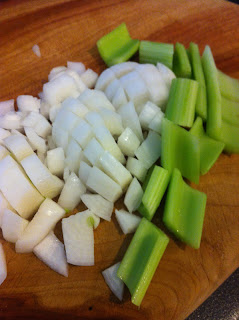 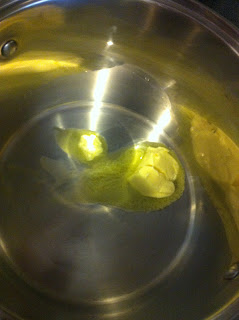 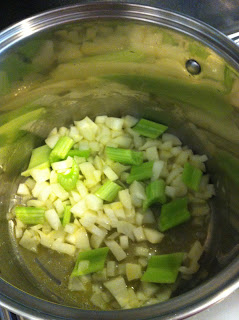 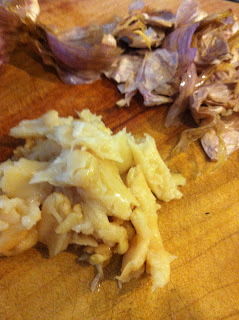 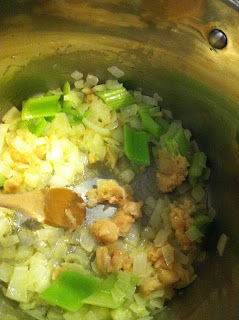 Add pumpkin mixture and stock and stir to combine. Bring to the boil , then reduce heat to low and cook for 30 minutes. 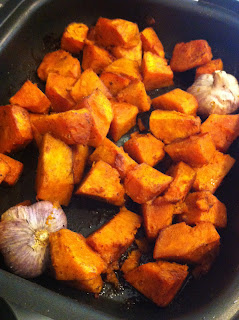 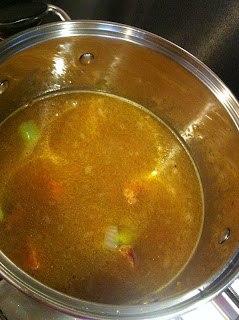 Puree soup using a stick blender or food processor. Stir in cream. Top with sour cream and chives, and serve with crusty bread on the side. 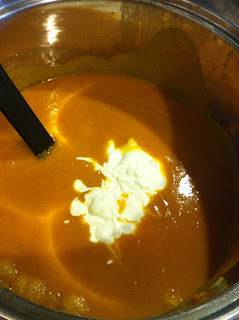 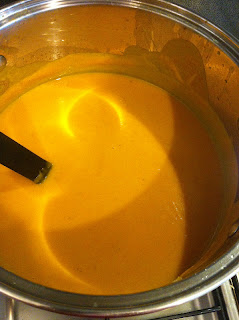 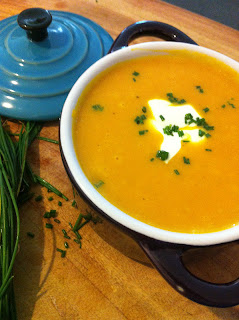