Now I'm guessing but I think B will have something smart to say like - "your really showing your age M" but I'm really obsessed with those chocolate wheaten biscuits you can buy...doesn't even need to have the chocolate on the back for me, but I always remember growing up as a kid and all the "older" people would have them with their coffee or tea and they never interested me then but I could quite easy sit and eat half a packet now! ( I was actually believing they were good for me because they had wheat germ in them!)

I casually stumbled across this recipe from one of my many biscuit books that has become part of my bedtime reading each night and it was a number one priority to make!

I know what most of my friends out there ( and you know who you are) will say - "Too hard", well it's not (Note from B: it really isn't hard - if I, B, can do it - you can too!). If you have kids this is a great one to get them involved, on one of those rainy afternoons or just for something to do. My 3 love them and I have to make double each time I make them, as before they are even cool they seem to disappear off the cooling racks! (Note from B again: you don't have to be a kid to love these M!!). 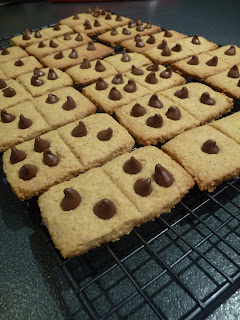 I think they look great.....you could have a game of dominoes but you would have to be quick before they are all gone! 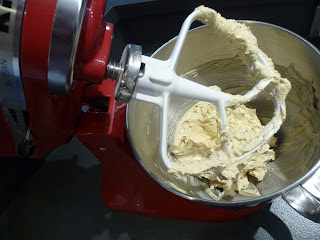 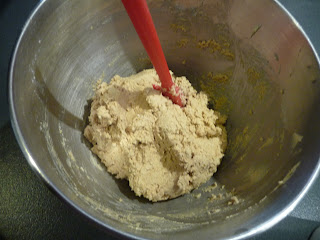 2 Roll dough between sheets of baking paper until 5mm thick. Cover, refrigerate 30 minutes. (I did this in the reverse, so I put my dough in the fridge before I rolled it out as it is very soft, this worked out better for me)
3 Preheat oven to 180 degrees/160 degrees fan-forced. Grease oven trays, line with baking paper. 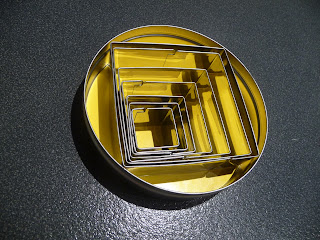 4 Using 9cm square cutter (I bought this great little square cutting set from a fantastic shop in Loganholme called Kitchen Warehouse) cut each square in half to make rectangles. Place about 3cm apart on oven trays. Using a knife, mark (do not cut through) each rectangle across the centre, to make two squares. Press chocolate bits into into each square  to make dominoes. 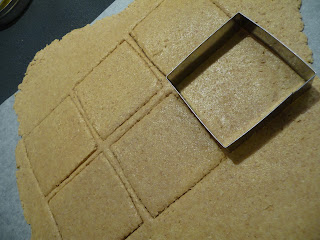 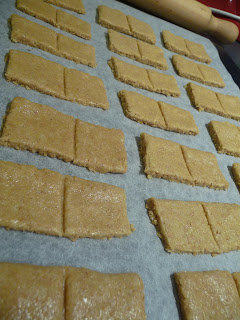 5 Bake about 12 minutes. Cool on trays.
6 Spread bases of dominoes with melted chocolate, set at room temperature on baking-paper lined oven trays. (I actually didn't cover my bases this time but have done in the past) 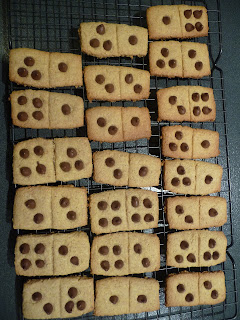 I hope you like them as much as we do!